It all started with a sketch, a road trip, and a climb on a rusty ladder. 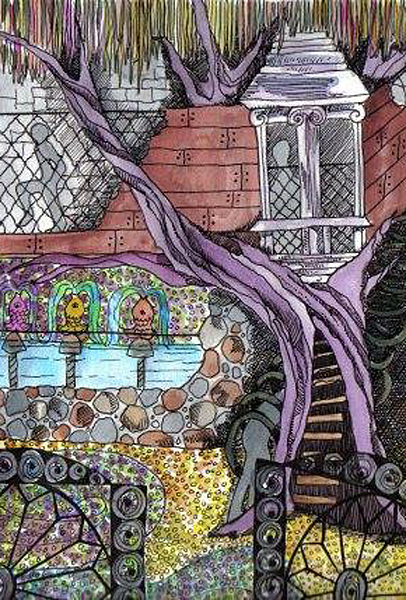 Lisa Smith Williamson knew that it was time for a community-driven art project in the Bluff City—one that could inspire the next generation as well as bring together the larger community. Her love of the visual arts, child education, and community outreach all informed the process of developing the early Junkyard concept.

The impetus began with a series of concept sketches in 2007, illustrating an imaginary land of repurposed architectural elements, industrial salvage, and urban ephemera. This resulting world was a place of mystery, imagination, intellectual challenge, and endless play. “The Junkyard” world could be an escape where discarded (and overlooked) elements were elevated and transformed—along with those around it. The term “junk” also became a key part of the concept, taking ownership over the word and turning it into a positive trait.

Lisa’s inspiration was further validated when visiting The City Museum in St. Louis, which has become a revolutionary artistic destination since its founding in 1997. Amazed by the sheer scale and complexity of the structure, she quickly realized that Memphis could also produce a similar project, but one with its own genuine flavor and purpose. Given its location at a crossroads of culture and history, the city was a perfect fit for such a project. Truly a match made in Juke Joint heaven.

These initial explorations and experiences culminated in the formation of a “Junkyard exploration committee” shortly thereafter. The informal group consisted of influential city leaders, developers, and advocates. Since that time Lisa and company have sourced potential spaces, solidified relationships with supporting artists, and identified possible sources of funding to make the dream a reality.

2017 is truly an exciting year. Given the recent growth of arts communities, entrepreneur-led businesses, and public projects in Memphis, the time is right for The Junkyard to assume its role as a place for all to come together, learn, and create. Please help us make the rusty dream become a reality.